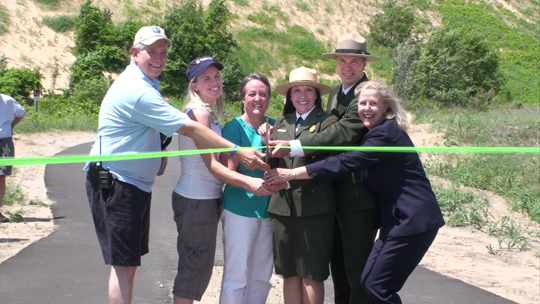 A ribbon cutting on June 20 marked the official opening of the first segment of the Sleeping Bear Heritage Trail, which runs about five miles from the Dune Climb at the Sleeping Bear Dunes National Lakeshore to Glen Arbor. While that was the official opening, the hard-surfaced, non-motorized trail had already seen plenty of use since construction was completed in the spring. 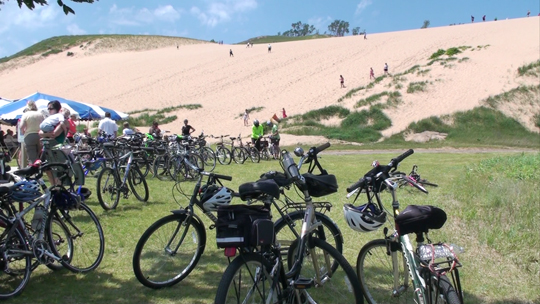 The Heritage Trail is a project of the Leelanau Scenic Heritage Route Committee, which is managed by the Northwest Michigan Council of Governments. When it's completed the Trail will run 27 miles through the Sleeping Bear Dunes National Lakeshore from Empire to Good Harbor Bay. Prior to the ribbon cutting a variety of people, including the National Park Service's Midwest Regional Director, talked about what the trail will mean to the park and the surrounding area.

"This trail will give people options other than their cars to get around the park and to the park as the connections happen and even more importantly in to neighboring communities engaging the business community," said Mike Reynolds, Midwest regional director for the National Park Service.

"What trails mean to northwest lower Michigan is quality of life," said Julie Clark, executive director of TART Trails. "It's a choice that you have, and it's a pleasant one, for getting to places you want to go as well as being that tourist attraction."

"As we were in the planning for this trail what we wanted to make sure of was that this fit our mission which is to get people in to the resource and provide them access in a way that doesn't diminish it," said Ulrich. "The trail is perfect for that."

More about the Trail

The ribbon cutting celebrates the completion of nearly five miles of hard-surfaced, non-motorized trail between Glen Arbor and the Dune Climb. When fully completed, the 27-mile trail will run from the southern edge of the Leelanau County through Sleeping Bear Dunes National Lakeshore, Empire, and Glen Arbor, to Good Harbor Bay. Construction of the remaining segments will continue as funds are raised.

“This spring we surpassed a million dollars in private funding, much of that generated by the local community. We’ve got some big milestones ahead of us this summer to keep trail construction rolling next year, but I think people can now see and experience the trail and benefits it can bring and they’ll want to help keep the project going,” said Julie Clark, executive director of TART Trails.

The trail was included in the National Lakeshore’s most recent management plan and then was analyzed and approved more specifically in an Environmental Assessment.

“The Sleeping Bear Heritage Trail is the single most exciting project to come out of our recently completed General Management Plan. The Trail will provide a wonderful way to explore and learn about the park and become a meaningful alternative for visitors to travel between park sites and local businesses without having to use their cars," said Dusty Schultz, Sleeping Bear Dunes National Lakeshore Superintendent.

Along with strong financial support from local residents and foundations, trail project partners have also had success obtaining federal and state grant funding. So far the Trail has received $6.3 million in state and federal grants.

“This was a wonderful day to celebrate the opening of this major segment of the Sleeping Bear Heritage Trail after the many years of planning," said Patty O’Donnell, Sleeping Bear Heritage Trail Project Manager - Northwest Michigan Council of Governments. "This segment was chosen as the first to complete because of the connectivity between the Dune Climb, the Group Campground, Historic Glen Haven, D.H. Day Campground, and Glen Arbor.”

Funding for trail construction is secure from the Dune Climb to Empire and Glen Arbor to Port Oneida. To move forward with construction, nearly $500,000 in matching funds are needed. To learn more about the project and how you can be a part of the effort visit www.sleepingbeartrail.org or call Pam Darling, Development Director, TART Trails, 231-941-4300.