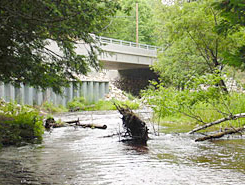 NORMAN TOWNSHIP, MANISTEE COUNTY - Manistee County is deservedly known as the place where "Life Meets Water."  The county's Explore the Shores program is plowing new ground for the county and Michigan with a goal of making Manistee county the destination where people of all ages, needs and abilities can access, use and enjoy its lakes, rivers, streams and wetlands in addition to its Lake Michigan shores. One of the goals of Explore the Shores is to simply let people learn about the unique attributes and opportunities in the County's water-rich environment such as Pine Creek, an important tributary to the Manistee River.

The Michigan Department of Natural Resources Fisheries Division has issued a "Status of the Fishery Resource Report" on Pine Creek, a Designated Trout Stream that begins in Manistee County's Norman Township and flows for over 20 miles before entering the Manistee River at a site locally known as Udell Rollway in the Manistee National Forest. The report was authored by Mark Tonello, a Fisheries Management Biologist who has led research and preparation of several Fishery Resource Reports, including one completed last year on Manistee Lake in Manistee County.

The Pine Creek watershed is mostly forested and large portions of the Creek are accessible through the public lands of the Manistee National Forest that are managed by the U. S. Forest Service.  Brook Trout were first stocked in the Creek in 1889 with Rainbow Trout stocking beginning in 1938. There are several man made dams and beaver impoundments on the Creek and its tributaries, including a dam  constructed in 1890 on a narrow gauge railway during logging operations. The stream is open for fishing from the last Saturday in April through September 30. The minimum size limits are 7 inches for brook trout, 8 inches for brown trout and 10 inches for rainbow trout with no more than five trout harvested per day and no more than three over 15 inches.

In addition to its population of resident brook and brown trout, Pine Creek provides important habitat for the natural reproduction of steelhead, chinook salmon, and coho salmon.  Of five sites sampled by DNR in 2010, one or more of these species was present at four of the sites.  As a result, the protection of the Pine Creek watershed is important to the recreational fishery of the Manistee River and Lake Michigan.

A habitat restoration evaluation study was completed by the Natural Resources Department of the Little River Band of Ottawa Indians and Grand Valley State University from 2004-2008.  Three road crossings were improved and positive changes in fish populations resulted. The Manistee Road Commission has replaced nearly every road/stream crossing in the watershed in the last ten years to help protect the watershed with the support of partners such as the Michigan Department of Natural Resources, Little River Band of Ottawa Indians, Conservation Resource Alliance, U.S. Forest Service, Lower Manistee River Partnership, Michigan Department of Environmental Quality, and others.

Due to its size, Pine Creek will likely never be a "destination fishery."  However, it does provide some excellent small-stream angling opportunities while helping to support the Lake Michigan fishery for migrating salmon and trout species. So mark your calendar to Explore the Shores of Pine Creek during 2012. You'll enjoy the solitude of the creek and the forests that surround it while dropping a line for one of several beautiful trout or salmon species.

For a complete copy of the Pine Creek report, go to: