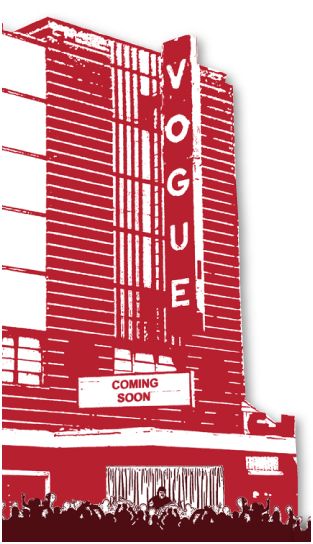 The Historic Vogue Theatre of Manistee (HVTM), the nonprofit with a mission to reopen the Vogue Theatre, has entered into an agreement with Orion Construction, Inc. to restore the Theatre. The restoration will be carried under the direction of the HVTM Board, in keeping with architectural specifications developed under contract with HVTM by Kendra C. Thompson Architects.

Orion will complete interior and exterior restoration at a cost not to exceed $1,371,851. This does not include architectural and engineering costs already absorbed or replacing the Vogue's roof and  interior demolition that have been accomplished. The agreement with Orion also does not include approximately $424,000 in anticipated costs for audio and projection equipment installation that will be the responsibility of Boston Light & Sound.

Orion will soon solicit bids from contractors and other suppliers to carry out all of the work required to complete the restoration. The Ludington Home Depot store will coordinate with bidders and Orion since Home Depot has volunteered to provide materials for the restoration at their cost if their cost is less than that quoted by bidders.

Orion estimates that the restoration process will be completed in approximately five months from the start date which has yet to be determined.  All bid documents will be available at the Vogue Theatre web site, www.voguetheatremanistee.org. Any qualified individual or organization may submit bids. The beginning of the bid process will be announced under a separate news release.

"This is a big milestone toward the rebirth of the Vogue," said Steve Brower, Treasurer for the HVTM and Chair of the Vogue Theatre Capital Campaign. "We need about $400,000 to wrap up the $2.25 million capital campaign in addition to donations received and pending grants. We hope to narrow that gap as soon as possible so that Orion and their contractors can begin work. While this will be an open, competitive bid process, we hope that all qualified individuals or businesses in the greater Manistee area will respond to the request for bids and compete for the work."

Founded in 2000, Orion is based in Grand Rapids, Michigan and is a multi-service construction company that provides general contracting, design/build construction, construction management and other services. They are experienced with "green," environmentally friendly construction, including construction projects with LEED Certification.  John Boostra, one of two Orion partners, will oversee the Vogue restoration.