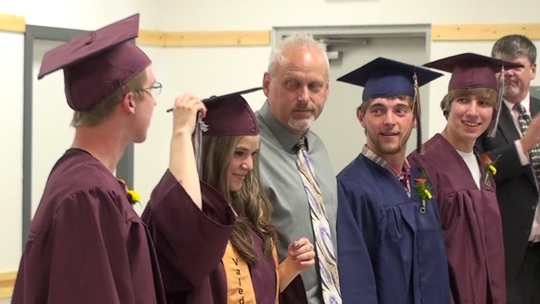 Four graduates received their high school diplomas May 16 at the Beaver Island Lighthouse School Class of Spring 2012 Graduation/Completion Ceremony. Nineteen other students received certificates for completing a semester at the school. The ceremony was held on the mainland at the Charlevoix VFW hall so the families of the students could attend.

"I've come so far and I really have grown a lot," said Lisa Clark, the class valedictorian.

"I'm so happy right now it's crazy, I've been waiting so long for this," said Alan Brown, one of the graduates.

Lighthouse School Site Supervisor Steve Finch was the keynote speaker. He says his job gives him the opportunity to watch young people transform their lives. 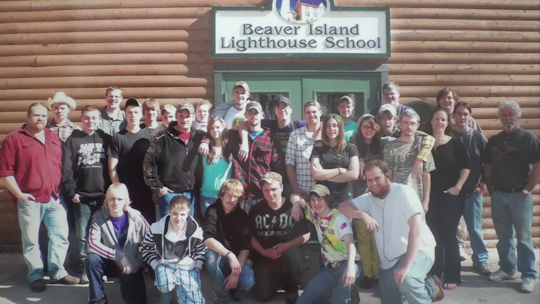 "You'll see the pride in the student's eyes because they did something special," said Finch. "They made a decision that I'm going to change my life, I'm going to take control of my life."

A variety of special awards were presented to the students including the Student of the Semester award to Luke Weber, and the 10-10-10 Scholarship which went to Lisa Clark. Scholarship founders Beth Urech and Mark Gillingham were on hand to present the award which got its name from the date of their wedding anniversary.

Clark also received a scholarship from the Beaver Island Lighthouse Fellowship Church. She plans to enroll in the culinary program at Northwestern Michigan College. 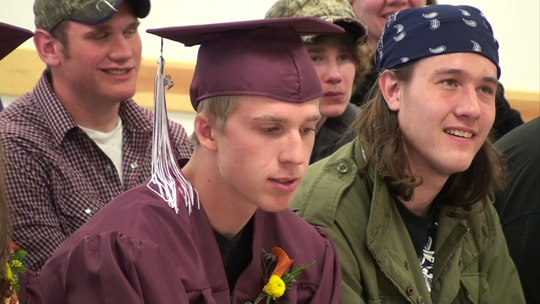 After the awards and diplomas were handed out, students talked about what the Beaver Island Lighthouse school means to them.

"I'm an only child but it's like I have 18 brothers and three sisters, that's how close you get with the people," said Justin Thomas, one of the graduates.

"You're not just a student," said Brown. "The staff will help you with whatever you need help with."

"They've taught me how to be a better person and just believe in myself," said Clark. "I love that place and I'll keep it in my heart forever."

Watch the video to see some highlights from the ceremony and to hear what the graduates had to say about the school.